Celebration Concert – Click here for a link to our photo album

On Sat Oct 15 Patcham Silver Band celebrated its 70th Anniversary, with a fine concert and lots of socialising, photos and cakes! Both the Youth Band and the Senior Band did themselves proud while entertaining their audience of families, friends and special guests.

The Bands’ freshly minted CD “Pastures New” was eagerly listened to (and bought) during the run-up to the concert, and a rolling film displayed the Bands at different events during the past few decades. Many photo albums were pored over during refreshments, with lots of oohs and aahs
We were also celebrating the 10th year of our present  MD James Benka-Coker’s reign as Musical Director (Who can forget his own 40th birthday concert at which he played every single instrument?) Chairman (and erstwhile MD) Barbara Deane also praised Sandra Clinton for her inspirational leadership of the Youth Band, and Vicki Windslow celebrated 25 years of playing with the band. Well done, everybody, and many thanks to our guest players who joined in!
A wonderful cake with our logo had been baked by Wendy Hardy and was enjoyed with a glass of fizz, and a smaller white cake had the music of Happy Birthday to You cleverly piped in black icing. A Speed Raffle added to the fun (and funds!) and excitement.
Now to the music: both Bands combined to play Shostakovich’s Festive Overture – an appropriate opener, with both MD’s keeping everyone in time! The Senior Band followed with Four Cities Symphony (one of our test pieces), Deep Harmony, Don’t Stop Me Now (Freddie Mercury) and the audience readily joined in with Amarillo. A Quartet took to the stage to play Don’t Worry, Be Happy while the bands regrouped. The Youth Band then played Colonel Bogey, Happy, The Medallion Calls, Bohemian Rhapsody (their favourite), I vow to Thee my Country and Ghostbusters (with apologies to Rosie…)
After the interval the Youth Band played a transitional piece called A Fairlop Fanfare, before the Senior Band resumed with Share my Yoke, Hey Jude, Pokarekare Ana, Hot Toddy, Kalinka, Hine e Hine (with our faithful soprano Margaret Thompsett singing the solo), In the Mood, then both bands wound up the evening with Sussex by the Sea and Spirit of Freedom
Onwards and upwards, as they say! Roll on our 75th in 2021….

By the end of 1947, the band had become well established and its musical leadership was taken over by Mr Weston (the grandfather of Paul Weston who was also to become a conductor of the band later on in its life). Under Mr Weston’s direction, the Band continued to grow and to improve its musical expertise. By 1958, under the musical direction of Bill Roberts, the Band had improved sufficiently to take part in local band contests and enjoyed some early successes. Although in 1962, Bill Roberts handed over the baton, he retained a keen interest in the Band’s welfare and conducted the junior quartet at the SCABA quartet and ensemble contest in the late 1970’s

In 1962, the Band was taken over by Bert Osgood who himself was an accomplished band master and musical leader of young people. Bert gave fresh inspiration to the Band and, in consequence, its numbers swelled and the musical standard further improved. Also at this time, a number of young people from Hangleton joined and began the tradition of including young people, which has been continued right up to the present. In 1964 the Band’s name changed to the Patcham Parish Band and then in 1966 to the Patcham Parish Church Band, which remained its title right up to 1992.

By 1970, the Hangleton Band has been established under the leadership of Bert Osgood and Patcham Parish Church Band had a change of musical director. Sammy Gordon took the Band over until 1976 when, due to ill health, he had to retire. Although the Band’s numbers were smaller during this period, it nevertheless maintained a good standard of music and continued to fare well at local band contests.

Sammy Gordon’s forced retirement came suddenly on the Band and a young member took on the task of keeping the band together during this difficult period. Barbara Deane became the new musical director and, despite a small membership, the original enthusiasm still remained. During the late 1970s Patcham Band was forced to go back to its roots and new players (young and older) were enlisted and some taught to play. Dedication and hard work helped to put in place some good foundations for the future and several of the new recruits from that time are still active members and friends of the Band today.

During the period 1980-87 under Barbara’s directorship, the Band was restored to its former strength and returned to contest playing standard as a full-sized twenty five piece silver band. In 1987, Barbara retired from conducting and was succeeded by Paul Weston, a music teacher and experienced brass player. Paul brought fresh vitality to the Band, which continued to prosper and was rewarded by promotion to the 3rd section in SCABA. Due to work commitments in London, Paul relinquished the leadership of the Band in favour of Christine Nonoo, who continued to build on the sound foundations that had been laid.

In 1992, in consultation with All Saints Parish Church, the Band’s name was changed to Patcham Silver Band which remains its name today. During this time also, the musical leadership passed first to David Barringer of the Coldstream Guards and then to David Allen, who was himself a former member of the Band.

In 1994 the band engaged Richard A. Baker as musical director. Since then a youth band of approximately twenty members was established that continues today, and the main band rose to the second section in the local contest arena. The band recorded its first compact disc at the beginning of 2002 featuring both the adult and youth bands.

Barbara Deane took leadership of the adult band in September 2002 after Richard moved on due to work commitments. Also at this time, the musical directorship of the Adult & Youth bands was divided up, and Sandra Clinton gave up the Secretary’s pen to take up the baton as Youth Band Conductor. Sandra has since brought a large number of young players up to performing standard several times over, not only thrilling concert audiences but winning awards at the local ensemble contests.

Meanwhile, under Barbara’s direction the adult band performed at a number of local venues and continued to build on our local reputation. Our time under Barbara’s leadership culminated in the band’s 60th Anniversary celebrations in 2006.

James Benka-Coker became the musical director of the band in January 2007. Under his direction the band has gone from strength to strength. We have performed many of his own arrangements, had success at the Quartets and Ensembles contest in February 2008 and successfully introduced our most able youth band players to performing with the adult band. 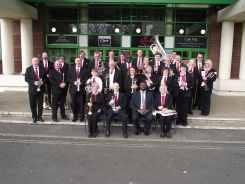